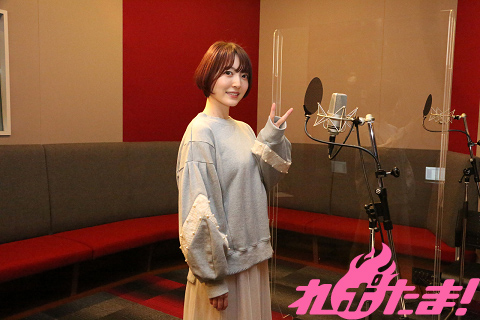 Coming after the release of “Cyber Sentai Last Angels SP STAGE 1 Angels of the Light” in March 2021 and “SP STAGE 2 Character Song Collection” released in April of the same year, the third CD will finally be released on March 2nd (Wed), 2022! Fighters known as the “Last Angels” (hereafter referred to as “Angels”) fight in a desperate battle that will determine the survival of mankind.
Additionally, Lav (voiced by Ayana Taketatsu) & Midi (voiced by Sakura Tange) perform a duet in the new ED theme “Invisible Link”, available via digital distribution starting February 16 (Wed). The two singing voices beautifully express the nature of their world in this story.
This time, we got a chance to talk to Kana Hanazawa, the voice of the Last Angels’ member Grace.

―What were your first thoughts when you heard there would be a sequel?

Kana Hanazawa: I didn’t have many opportunities to perform in the voice drama of the original work, and this work was the first time for me in a while so I was eagerly anticipating the recording. I was really happy because I wanted to see more of the Angels in their attractive and fleshed-out world.

Hanazawa: I was impressed by the amount of battle scenes involved. During the battles, I thought to myself “This is a fun line!” and the Chunibyo in me really came out. I ended up having a lot of funny and entertaining interactions with Nikki-chan (played by Aya Uchida), and there were a lot of scenes that faithfully followed the spirit of the original work and it was a lot of fun to perform.

―Could you introduce to us your character again?

Hanazawa: Grace is a girl who uses her extrasensory powers to protect everyone else, and despite usually being calm she shows off her bravery whenever the combat starts.

―Are there any characters that you’re particularly interested in this time?

Hanazawa: Teddy. He’s a ridiculous enemy completely bent on destroying humanity, but his lines have some particularities about them and he’s really engaging.

―I’ve heard that there are a lot of battle scenes this time, but are you conscious of anything in particular when performing?

Hanazawa: I didn’t have visuals to work with, so when I was performing I imagined the battles playing out in my head, but it was fun to imagine the scenes where we were dealing a direct hit to the enemy. (laughs)
Also, it was a lot of fun performing the scenes where I was communicating with Hotaru-chan (played by Mizuki Hasegawa) in the heat of battle.

―Please tell us about a highlight from this work.

Hanazawa: I really like Lav-chan (played by Ayana Taketatsu) along with her behavior and demeanor. She’s the main character in this story, so I want to do my best to support her. Also, I was surprised by Grace’s blatant disregard for Nikki-chan. (laughs) I want to see more of their day-to-day conversation.

―In this story, humanity is subjected to the threat of annihiliation by the supermassive black hole bomb “Googolplex”, but what would you do if Earth were subjected to the same threat in real life.

Hanazawa: I wonder if I’d just give up and watch some TV while eating potato chips. And if the TV isn’t broadcasting anything, watch some streams online. “There are still a lot of dramas I want to watch~!” or something. (laughs)
Also, with the remote environments set up for everyone now, I think I could connect with a lot of people I know right away and immerse myself in plenty of memories.

Hanazawa: This is a story that really carries across the love from the creator. This time too, I hope you’ll all really get immersed in the world of the “Last Angels”. I hope you’ll listen and find out how Grace-chan and her friends fare against their powerful enemies!

【Present】(please note: applications from outside Japan are not available)
Hanazawa-san’s autograph on special coloured paper will be presented to one person!
Those who wish to apply are asked to please follow the Repotama! Official Twitter ＠repotama (https://twitter.com/repotama/) and retweet the tweet of this article. We will contact the winner via DM.
Application period: until March 18 (Fri) 2022 at 23:59 JST