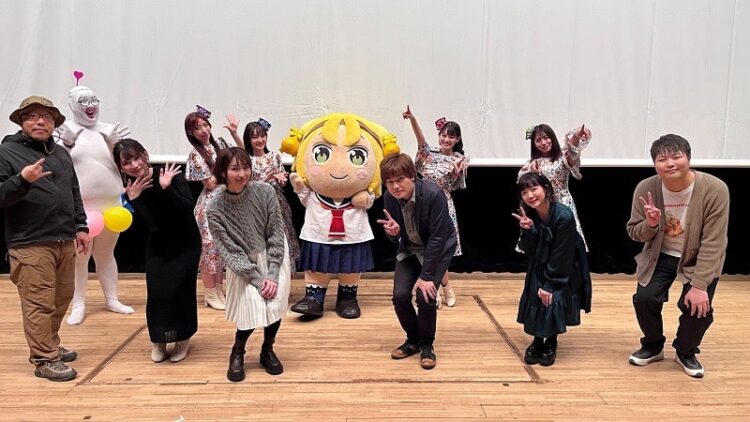 TV anime Yatogame-chan Kansatsu Nikki Season 4 is scheduled to begin airing in April 2022.
In commemoration, the fan-appreciation event “Dagane High School New Year’s Thanksgiving” was held on January 15 (Sat) at Nagoya Artpia Hall.
The event was held in two parts, one in the afternoon and one in the evening, and was filled with talk shows, plays and games.
Below we go into detail on everything that went down at the event.

First off, the cast and TEAM SHACHI performed a recitation drama.
Yatogame-chan and the others all get excited by the topic of “Which city has a food culture you like the best?” At one point, just as Kaito started, everyone slammed him with a “Don’t talk down to us just because you’re from Tokyo!” (lol)
Kaito then said “I guess I’ll take a good look at Yatogame-chan season 4 and learn more about other areas…”

After all the speakers gave their initial introductions, the “Let’s look back on TV anime Yatogame-chan!” segment began. The cast looked back on various memorable scenes with a video that was played.

Ichiki-san mentioned how in parts 1 and 2 at “Komeda Coffee” a particular “giant” dessert got everyone riled up, and now Komeda Coffee has become a place that’s also a favorite of children.
Kuroki-san talked about the time where she was dissed for immediately being associated with takoyaki just because she’s from the Kansai region, upon first meeting the team. She was happy to be trashed by somebody who doesn’t understand delicacies, as an experience that normally wouldn’t happen in her day-to-day life.
Ito-san chose to talk about that special word particularly used by people in kansai “shiran kedo” (a regional variation of “I don’t know”). If you use this powerful word, even if you claim ignorance without proof you’ll be let off the hook. It seems that there was also a lot of love for the scene involving Kaiyuukan Aquarium from Osaka.
On the other hand, Tomatsu-san chose to talk about the stage set in Osu Shopping Street. “There was an okonomiyaki restaurant that I really like near Osu Kannon. I liked the mitarashi dango that they sold there, so the scene made me want to go there again…”
She said, recalling memories from youth.

Here, video messages sent from the photography club members who couldn’t attend the event were watched.

Yuki Wakai (voice of Mai Tadakusa) who recorded the video at her parents’ house in Gifu prefecture, commented on the “Komi Yakisoba sauce” that was made in collaboration with this series. She appeared to be really happy at the confirmation of a new season.
Yoshino Nanjo (voice of Lala Shonai) said “Lala-chan-sensei often talks to herself in a locker, so I hope that this time around there were many scenes where she was able to talk with everyone,” earnestly pleading with author Ando-san and General Director Hirasawa to let her character be more involved with Yatogame-chan and the others.
Mikako Komatsu’s (voice of Yanna Sasatsu) message was read out by Ichiki-san, where she requested: “I was just speaking as I always do, but I was actually speaking in a dialect… This happened quite a lot. I really want this to be explored more in Yatogame-chan!”

The energy on-stage increased as they received various comments congratulating the new series, and they decided to dig deeper into the fourth season’s contents.
General Director Hirasawa stated that a new character would be appearing during the afternoon part of the event, and he said “It’s difficult since the length is so short, but I want all of the characters that have appeared so far make an appearance,” charging everyone up for the possibility of an appearance of all characters introduced so far. The Kansai duo of Kuroki-san and Ito-san were extremely happy. “I want to appear every week!” they said.

Next, TEAM SHACHI joined the event and the game segment set against the cast began.
First, the “Nagoya Presentation Showdown” was held. Team Shachi’s four members had to give a presentation, and then the cast had to predict who Ando-san would choose first.
With the theme of “Things I don’t want people to know about Nagoya”, Akimoto-san talked about how “The head office and flagship location of Sugi Pharmacy is located in Aichi Prefecture. Using the official app, you can gain points just by walking!” Tomatsu-san predicted that Ando-sensei would choose this first, and ended up being right on the money.

Next, the “Gesture Game Showdown” was held, with the rule that a two-person team taken from both the cast and TEAM SHACHI members would have to act out various charades and be correctly guessed by the member doing the guessing. The teams competed to see how many words they could get right within the time limit using charades.
A lot of words related to Nagoya, such as “Ieyasu Tokugawa”, “Nagoya Dome” and “Tebasaki” (tip section of a chicken wing) were played out, and a battle was fought hard between the two teams. In the end, the Ichiki/Sakamoto team and the Kuroki/Oguro team each got five correct answers, and it ended in a tie.

The final round was “All Times and Places” arranged in the style of Nagoya (?) as a “All Times and Places Meijo Line Game Showdown”. Anyone who wins one game would be given “758 points”.
Having to guess from a number of clues, Tomatsu-san won the fierce battle by making the most out of various prompts like “red things”, “vegetables”, and “sightseeing spots in the Tokai region”. She won the “Golden Shachi Figurine” and she smiled, saying “I want to improve my luck, so I’ll definitely decorate my house with this!”

The event is now nearing its second half, and the “Question Segment” began. A number of questions were picked from fan-submitted questions and the guests answered them here.

After being asked “What’s your favorite word from a dialect?” Tomatsu-san said “I like saying ‘shabi shabi’ instead of the standard ‘bisha bisha’. (laughs)” Also, Ito-san said that she prefers to say “Shiharun desu ka?” in polite speech, feeling that it’s less stiff than the standard variation of the same question (about whether somebody does something). She also talked about her experience using it around her superiors that she wanted to get on better terms with.

When asked “Have you ever improvised the wording of lines during dubbing?” General Director Hirasawa responded with “I do it all the time. During the first dubbing done for the first season, a person from Aichi prefecture said “If you cross this river, people won’t use this phrase,” and I received an enthusiastic explanation from someone local to the area. The nearby TEAM SHACHI members nodded their heads in agreement right away. In addition, Ando-sensei said “I am thankful that Tomatsu-san was proactive in changing the lines I wanted changed before I had a chance to correct the wording myself.”

Other stories were also talked about, such as the time when Kuroki-san seemed to be worried about having to do a lot of ad-libbing, but then was impressed how Director Hirasawa wrote new lines on the spot to use instead. Another story involving Ichiki-san living in Kyoto as a child was also brought up, as well as various other happy stories from all the guests.

Following a raffle to win lucky grab bags and autographed posters from the third season, an announcement segment was held.
Director Hirasawa talked about the 4th season’s theme song sung by Akira Ouse, saying “It’s a song filled with a genuine Nagoya spirit.” The sale of a new acrylic stand item was also announced, and the audience applauded.

At the end of the event, a message was delivered from the speakers to the fans, and things wrapped up while the venue was still full of energy.