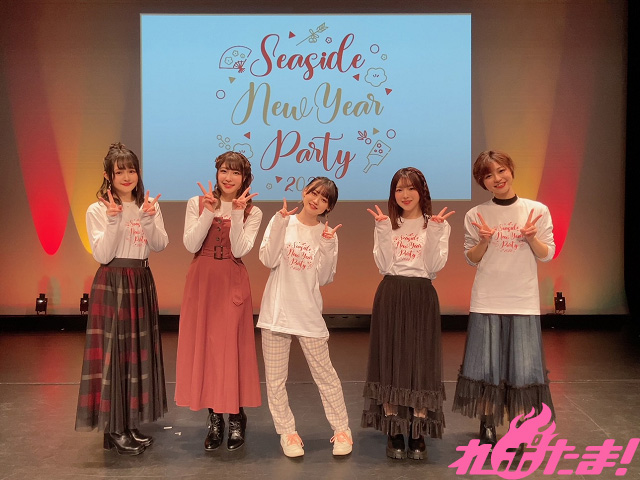 As the young voice actresses show off special skills, the person with the most common sense is also decided!? “SEASIDE NEW YEAR PARTY 2022” (Evening Part) Report

Seaside Communications (hereafter referred to as Seaside) is a production company that makes content with voice talents. An event featuring many personalities from programs produced by Seaside was held on January 15, 2022 (Sat) in the Science Hall at the Science Museum in Tokyo.
This time, we’ll be covering the events of the “Evening Part”.

The “Evening Part” featured Asuka Nishi from “SUZAKINISHI”, Yuna Ogata from “Tone Kentarou・Ogata Yuna no Kenshow TV!” Hina Tachibana from “Murakami Manatsu to Tachibana Hina no Manatsu no Hinatabokko” as well as Yukimi Hayase and Misato Matsuoka from “Hayase Yukimi, Matsuoka Misato no ‘Moshikawa’”.
It all kicked off with Nishi beginning to walk forward before everyone had finished their introductions, and the other four members took quick jabs at her as a result. (lol)

One they finished with that, the “2022 New Year Talk” began with talking about the year-end and New Year holidays, as well as 2022 in general.
With the theme of “What I want to do on my own time this year,” Hayase said “I want to try out doing caricatures. I tried to do 10-second caricatures of people’s faces, so I could use it as one of my special skills in my profile. However, even if I were to attempt showing off what I did at an anime or game audition, the results wouldn’t get me far…” she said with a bitter laugh.
In order to properly judge her skill, it was decided that she’d draw a quick portrait of Nishi-san, but Hayase-san was defeated when her model said “this is kinda bad!”
Matsuoka said “I’d like to clear a game. I haven’t been able to clear a game I bought yet, so I want to get all the way through it this year!”
Nishi then said, a bit more seriously, “I announced my marriage back last April, and I’m beginning to want a child soon…”

The next theme was “Please introduce your program,” and Hayase started with “My program is all about making people think ‘I didn’t know a person could be so jovial’” (laughs). Matsuoka said “On Friday night, I’m doing my best to help take the fatigue of the week away from everyone who tunes in!”
Nishi said “It’s a laid-back program where two onee-chans get together and talk about random topics you might hear at a family gathering!” Tachibana uniquely introduced her program by saying “For some reason or other, I get a lot of comments saying “kawaii”, so everyone who wants to leave such a comment, please tune in!”
Ogata said “Tone-san gives really great talks, so much so that I even take notes!” It could be said that Ogata taking notes on-site is her life’s work.

Matsuoka said that “I have a lot of ridiculous plans, so I’d like to invite guests to also be involved in the chaos.” Tachibana responded by saying “I nominate Murakami for that,” and then Ogata continued: “Tone-san would probably be into that,” with Nishi finally chiming in with “Also, Suzaki too…”

Next, Nishi became the moderator, and the “New Year Seaside Voice Actress Quiz Tournament” kicked off, where the wisdom and book smarts of the four young actresses were put to the test.
While a lot of the members were looking pretty anxious, Matusoka said “I was putting in a lot of hours when I was a student, so I’m shooting to win here!”
In response to the question “What is the phenomenon of the temperature being significantly higher in a big city compared to the surrounding area?” Matsuoka said “Donut-ification”. Sadly, the correct answer was “Heat Island Effect”.
In response to the question “What is the meaning of ‘Generation Z’, which was nominated for the 2021 Popular Word Award?” Tachibana said “the newest young person.” (another example of a correct answer could be “a person in their early teens to early twenties that’s had a smartphone since they were born”).
The next prompt “Write a greeting that’s an integral part of workers, but all in Chinese characters,” was flubbed by all, but there were some close attempts within the answers given.
In the end, Tachibana answered 2 questions correctly, and she was declared the best “common sense person” out of the four participants! Tachibana said to Matsuoka (who had made a number of close but still incorrect answers, “It sure is odd that all your answers were incorrect despite your impressive knowledge,” and the others laughed.

Next, the four people took on various challenges to win gifts according to the rankings given by Seaside staff in the “SEASIDE NEW YEAR PARTY 2022” segment. As in the Daytime Part, they were asked “What’s the best new year’s gift you can think of, other than money, to give to the 7 year-old son of a relative?” Tachibana won gold with her answer getting the most support: “A legendary Pokémon”.

In the “Kendama Challenge” Matsuoka declared “I took the Kendama Level 7 Test during all of my time at home,” and she succeeded in getting the ball to land on the tip of the toy four out of five times, and won first place! She won with a massive lead.

In the final “Ring Toss Challenge” the rules were changed so that the remaining three people would have a chance at making a comeback, and 10 points would be given for each success. However, nobody was able to succeed here and Matsuoka took the championship! She got an Amazon gift card worth 5000 yen as a result. Next, Ogata received high-quality chocolate, Hayase received a stuffed animal that responds to speech, Tachibana got a candy set, and Nishi received a participation award of 50 yen.

In the “New Year Questionnaire,” a talk was held based off of the answers received from fans in advance in response to a questionnaire. In the Evening Part, the theme was “What do you want the performers to try doing?” and one of the answers given was “I want Nishi-san to have a speech skill course for young voice talents.” In response, Nishi gently refused by saying “I think it would be fine to teach them in an unreasonable way, but I don’t want to have to be the person setting the right example for them.” (lol)

“I want them to sing karaoke,” was another answer given, and they all responded with “We want to have a karaoke tournament!” enthusiastically. There were also a lot of requests for different projects like “I’d like it if you did a bus tour,” so that they could interact with the fans.

At the end, Matsuoka said “I’m glad that I was finally able to show off my kendama skills (laughs). I’d be happy if I could stand on stage with all of us together again!”
Hayase said “We did so many fun things this evening and the time just flew by! I hope everyone was able to get familiar with us as individuals!”
Tachibana said “I’m really glad that I was able to appear in so many events with Seaside during the New Year holidays. I’m looking forward to the next event, too!”
Next, Ogata said to everyone “I was happy to be able to have a live event in front of everyone tonight. Thank you for all your continued support!”
Finally, Nishi said “It’s the first Seaside event I’ve been in for a long time, but I was surprised at how many fun new faces have joined in now. (laughs) I think I’m feeling rejuvenated after having an event with so many young members. Let’s all meet again, everyone!”
And with that, the event came to a close.