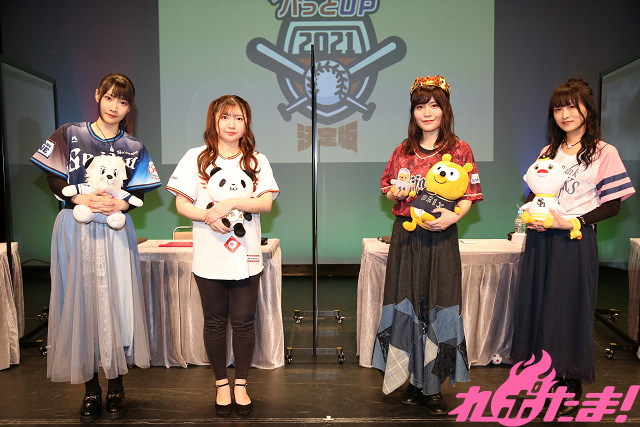 Summary of when the Buffaloes won the championship in 2021 for the first time in 25 years! “Kana & Airi’s Pat UP” 2021 Season Definitive Edition (Night Part) Report

“Kana & Airi’s Pat UP” is being broadcast via Nico Nico Live every Tuesday at 21:00. The two members in charge of the show are Kana Yuuki, who loves the Seibu Lions (Lions), and Airi Eino, who loves the Rakuten Golden Eagles (Eagles). Every time, they have a great time talking about exciting in-depth stories related to professional baseball.
The program’s event was held on December 5th (Sun) at the Science Museum Science Hall in Tokyo, and in the “Night Part” aside from Yuuki and Eino, Saki Fujita who is a fan of the Fukuoka SoftBank Hawks (Hawks) and the ORIX Buffaloes (Buffaloes) fan Rika Nishimori appeared as guests. They all enjoyed looking back on the 2021 season. 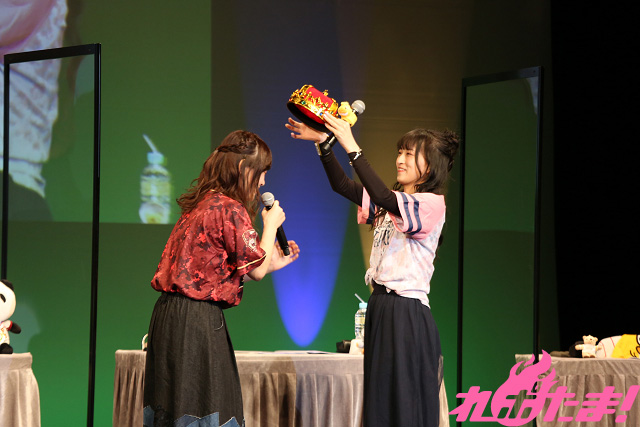 First of all, there were congratulations to be made at the fact that the Buffaloes won the season. Nishimori was given a “crown” by Fujita who is a fan of the team who became the champions last season, and seemed to be very impressed. Warm applause was also received from the audience. 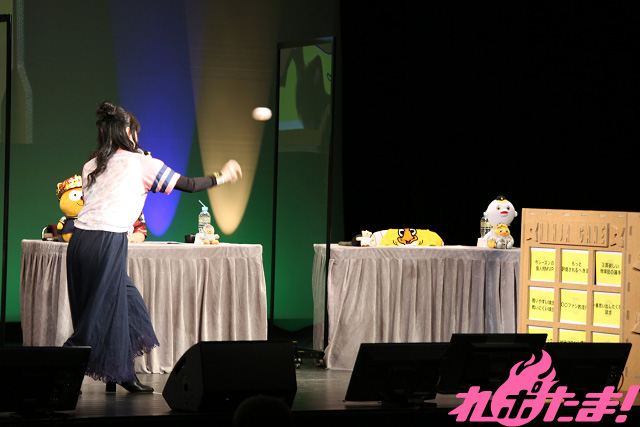 In the first segment “Struck Out Talk”, themes such as “Teams that are easy/difficult to compete against” and “Nice baseball goods to buy” were talked about as the members hit topics on a board with a thrown baseball.
The Buffaloes pitcher Yoshinobu Yamamoto made an outstanding performance this year, and was really popular when the theme “Really wanting this player for my team!” was talked about. Then, Nagano and Nishimori mentioned the Lions players “Hotaka Yamakawa (fielder) and Kaima Taira (pitcher)”, and Yuuki said with a bitter laugh “They ranked the lowest, so please overlook this part!” 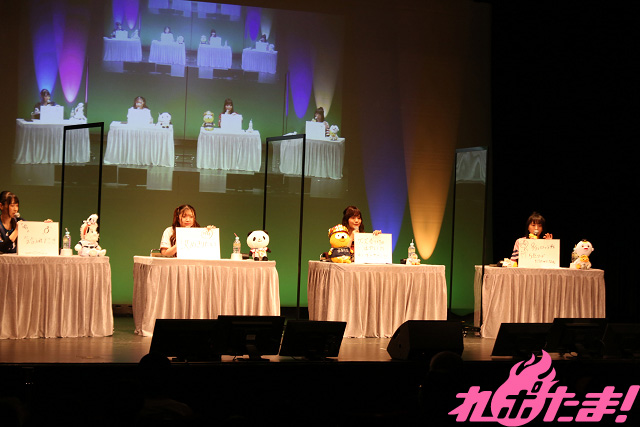 Next, in the “Pat Opinion Number” segment, things that you want to say to support your team were talked about, like “Katsu!” and “We love you!” but then Nishimori said “I want you to make a lot of merch.” It seems that the Buffaloes didn’t anticipate how much they would sell after their first victory in 25 years (?) and the goods were sold out immediately, one after another. The three other members were a little envious about what the winning team had to worry about. Fujita said “We appreciate you!” to one of the members of her team, Nobuhiro Matsuda, who has hit a total of 300 home runs. She hopes for further success next year. 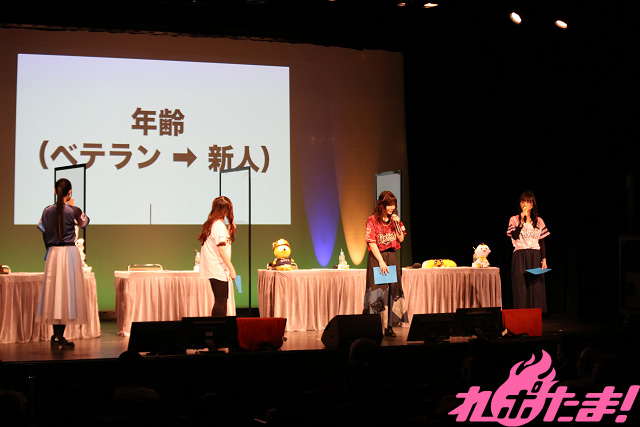 Next was “Indian Poker” according to new rules. Baseball players’ names were written on the cards that were dealt, and they had to follow the instructions written such as “age order” and “highest salary” and try to arrange the cards in the correct order.
Since the members do not know the names written on the cards when reading the attributes, it was a game where they had to figure it out by giving hints about the baseball players to each other and guess the correct numbers of the players. There weren’t any particular prizes handed out here, but the members said “Everyone should give this game a try!” with great enthusiasm. 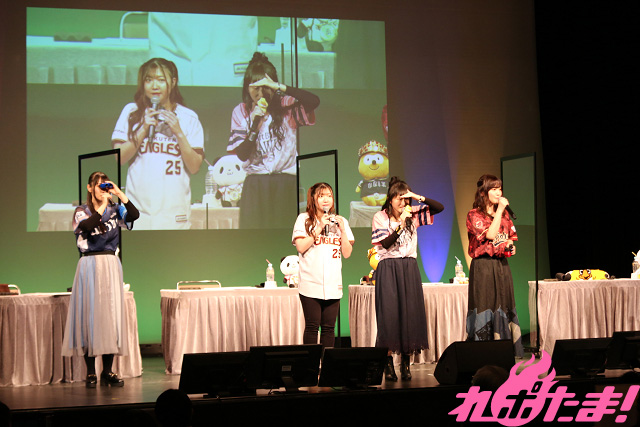 Finally, the “Support Board” segment took place. The opinions of the fans were gathered in advance on themes such as “what I want to say to the other teams” and “what I hope for next year”. The main draw of this segment was for the fans to bring in their opinions written in sketchbooks, and the four members had to try and read them from the stage using binoculars.
After reading the comment “I want Fujita to hold the opening ceremony at the Yafuoku Dome (the Hawks’ home) next year,” she said “I’d definitely love to do that!” There were also many other answers given such as “I want to cheer them on at the stadium” and “I want to sing a song will all of my might cheering on the team,” which was referring to the current situation where it remains difficult to physically go to the stadium or shout out loud in busy spaces.

At the end of the event, a present segment where four autographed baseballs were hit, and the event concluded to a charged and happy venue. 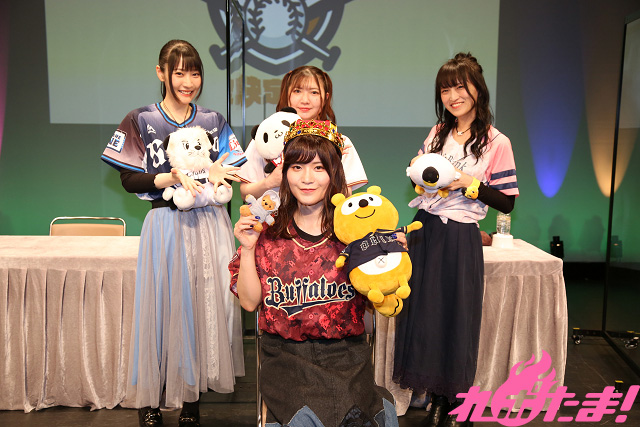 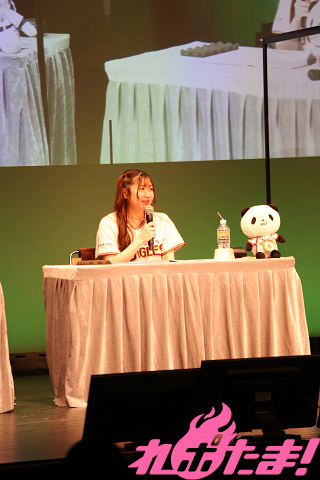 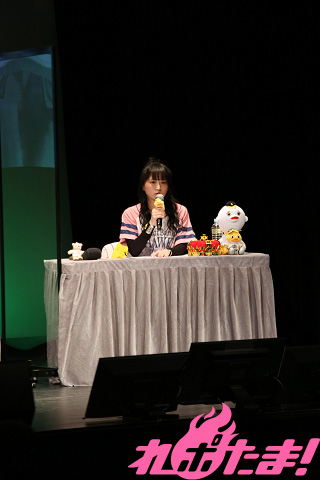 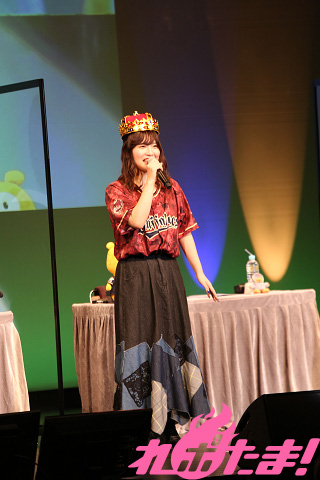 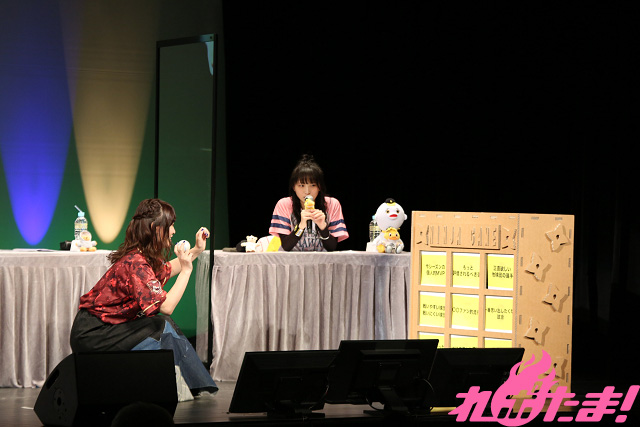 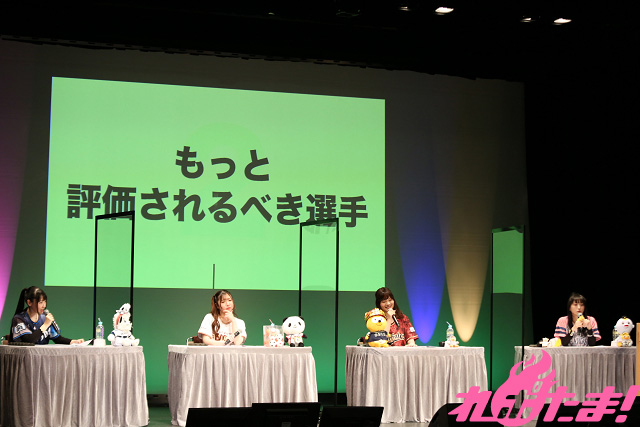 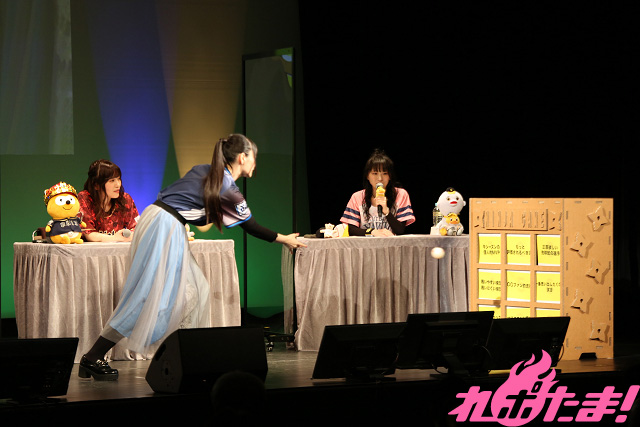 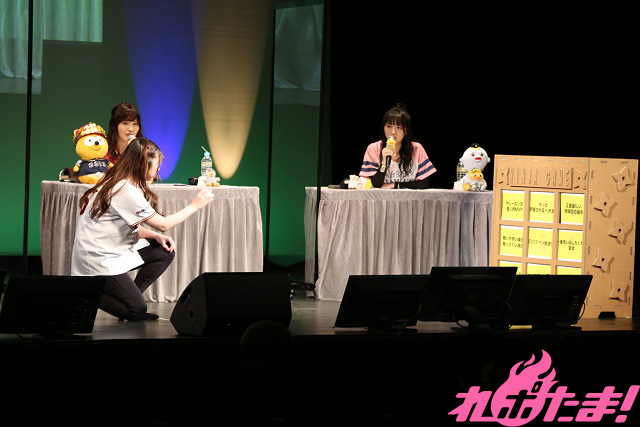 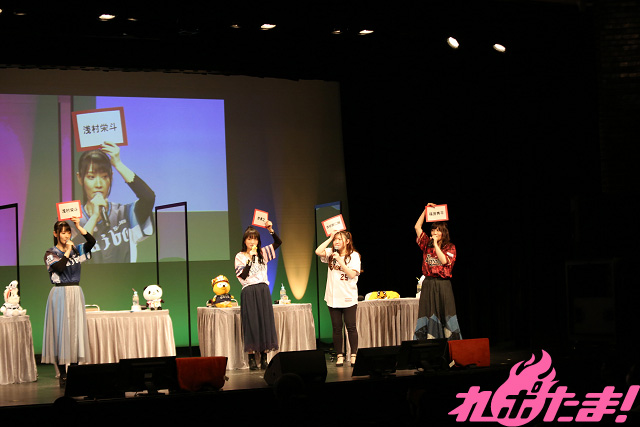 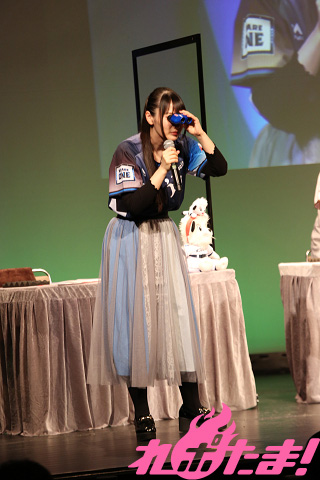 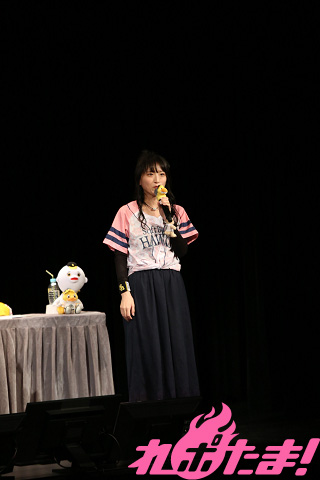 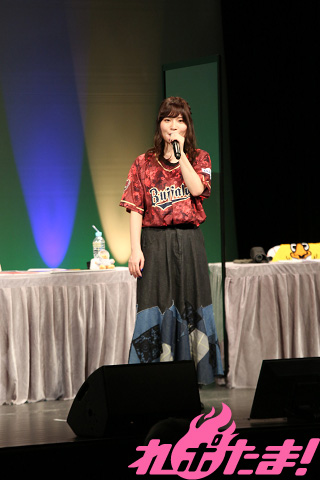 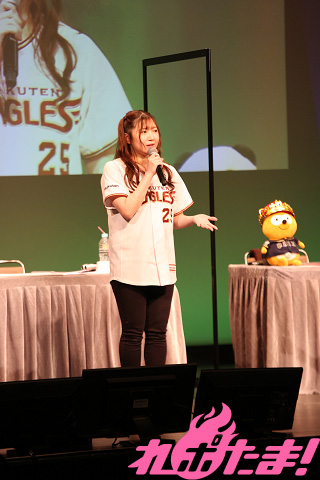 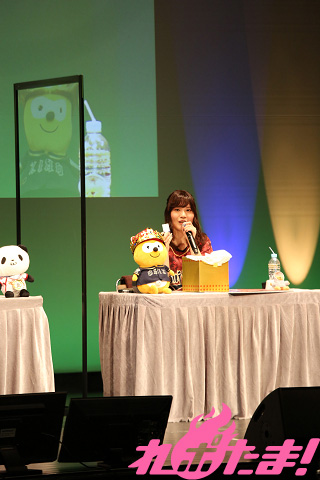 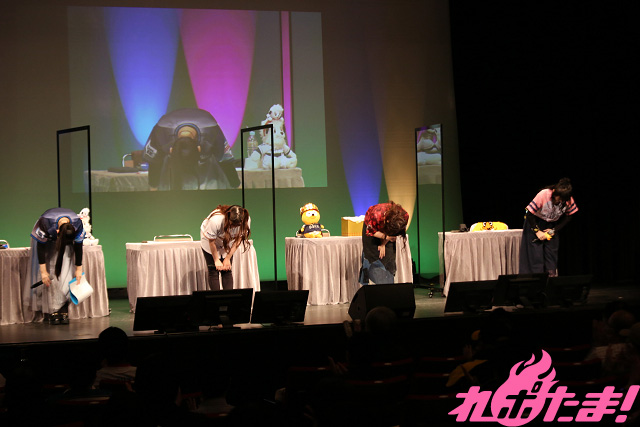 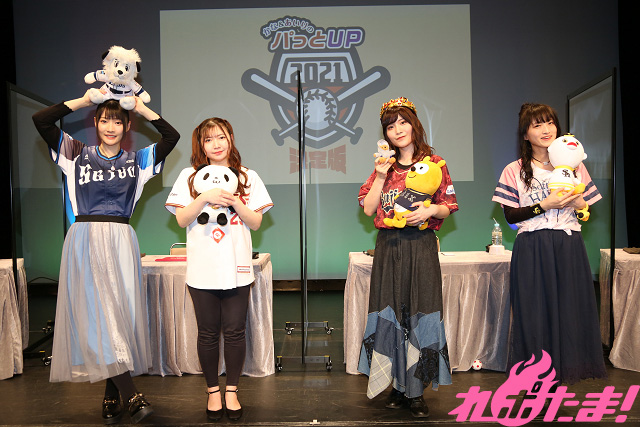