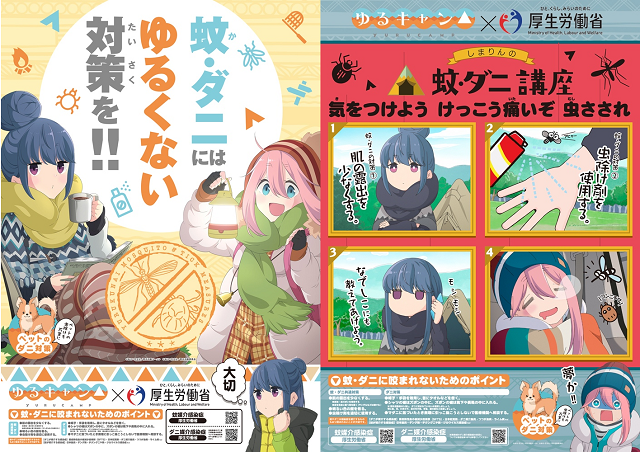 Nadeshiko, Rin, and Chikuwa call for prevention and countermeasures against mosquitoes and ticks in the summer! The Yuru Camp△ TV anime series has released new posters to raise awareness of mosquito and tick-borne diseases in collaboration with the Ministry of Health, Labor and Welfare

The TV anime series Yuru Camp△, with FuRyu Corporation serving as the representative secretary of the series’ production committee, has collaborated with Japan’s Ministry of Health, Labor and Welfare to create two types of posters calling for the prevention and countermeasures against mosquito and tick-borne diseases.
The poster can be downloaded from the Ministry of Health, Labor and Welfare website, so please feel free to check it out.

【Posters calling for the prevention of mosquito and tick-borne disease】 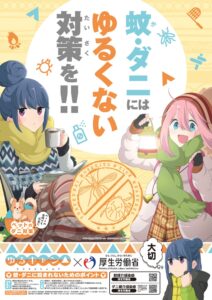 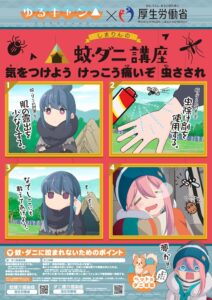 The TV anime series Yuru Camp△ (Laid-Back Camp) is a popular work with a laid-back story that involves high school girls going out camping and living their daily lives in the Yamanashi and Shizuoka prefectures. This collaboration was realized thanks to the support of a wide range of people, including not only fans of the original work and anime fans, but also camping enthusiasts.

In the poster design for the collaboration, some of the main characters of the series Nadeshiko Kagamihara, Rin Shima, as well as Ena Saitou’s dog, Chikuwa, are included. Creating a scene with the characters around the theme of camping in a four-panel manga format, the poster shows how to protect yourself against mosquitoes and mites while calling for the importance of using “not laid-back” measures.

In the summer as it gets hot the amount of skin one exposes tends to increase, and it is possible that you may be bitten by mosquitoes or mites that transmit pathogens, so one needs to be careful if going camping anywhere outdoors. Particularly, please be aware of Japanese spotted fever, as well as severe fever with thrombocytopenia syndrome (SFTS), which have been frequently reported in Japan along with reported fatal cases, as they can be transmitted to humans through bites from insects carrying the pathogens. 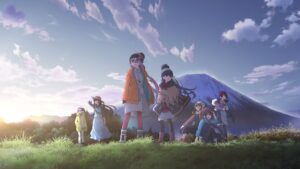 Yuru Camp△ is a TV anime series based on a manga of the same name (created by Afro), which was serialized in Manga Time Kirara Forward published by Houbunsha and is currently being serialized in the manga app COMIC FUZ (Houbunsha). The camp is filled with “delicious food, beautiful scenery, wonderful locations, and a mix of the casual day-to-day with a pileup of the extraordinary”.
The first season of the TV anime began airing in January 2018, the short anime Heya Camp△ aired in January 2020, and Yuru Camp△ SEASON 2 began airing in January 2021. A new movie will be released in 2022.