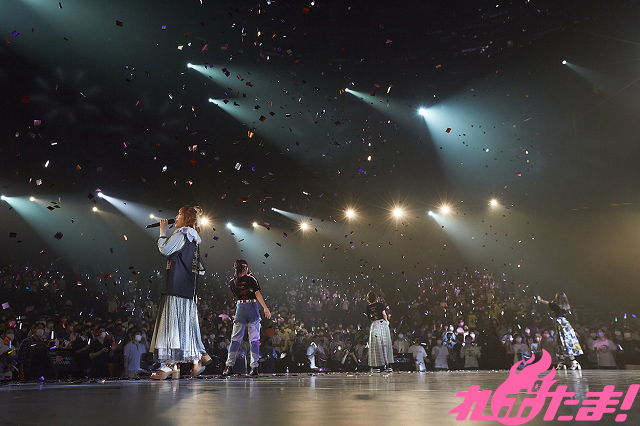 Popular voice actress artists on the rise give a great performance in front of their fans! “EJ My Girl Festival 2021” (Day 2) Report

A festival event where rising star voice actresses give exciting performances and talk with the audience was held on June 19th (Sat) and 20th (Sun).
On the second day, Maaya Uchida, Ayaka Ohashi, Miyu Tomita, and Yoshino Nanjo made an appearance. 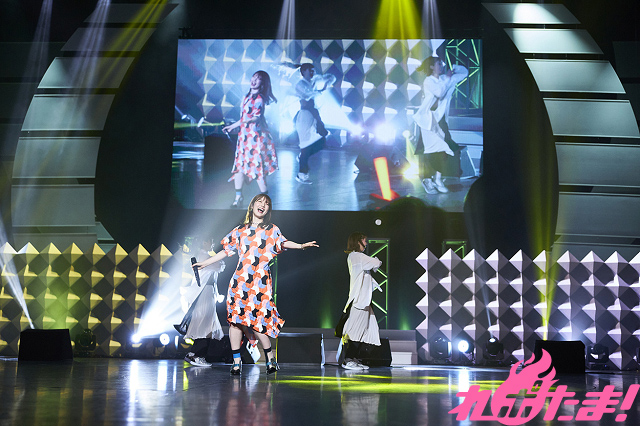 First of all, Uchida appeared on the live stage in the same costume she wore during the shooting of “My Girl”. She was greeted by red concert lights held by the fans and sang “Soushou Innocence”. After an emotional performance of “Heartbeat City”, she performed “+ INTERSECT +” while being cheered on by the fans, followed by “Strobe Memory” under the orange stagelight.
Next, a “Talk Corner” question-and-answer event was hosted by Tenshin Mukai. After telling the audience that she always gives it her all whether at work or on a day off, Uchida was asked by a fan how she drinks her alcohol, and a good time was had while she went into detail in her response. 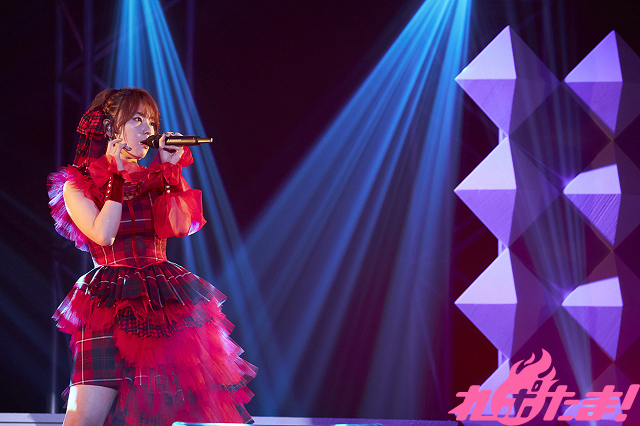 Next, Tomita made her appearance. She came on stage dressed in a bright red costume and immediately started a performance of “Broken Sky”. While reflecting on the joy of singing in front of the fans for the first time in so long, the audience was asked to “Please shake your concert lights!” by the MC. “Ageha Twilight” was then performed as the lights turned purple, followed by a performance of “Dilemma” from the 1st album “Prologue” as the lights turned red. Lastly, she performed “Letter”, for which she wrote the lyrics and which also appeared on the 1st album. The lyrics were projected on the monitor at the back and the audience joined in on the singing.
Back at the “Talk Corner”, the topic of dogs came up, and it was revealed that Tomita’s recently acquired “handsome shiba” has become something of a “baka doggo”. 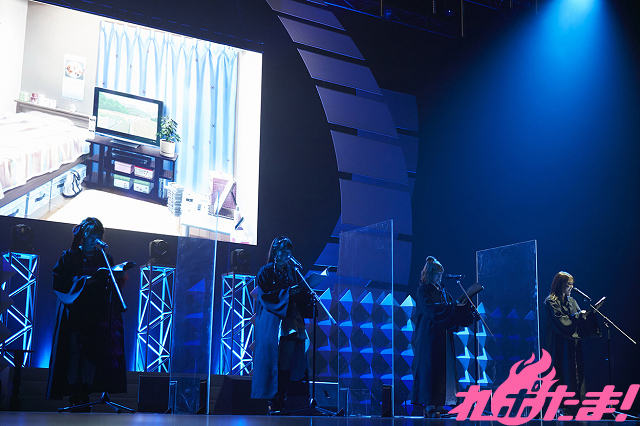 Here, the original read-aloud drama “memento” by four performers took place. A story inspired by a song of the same name by TRUE (Miho Karasawa) unfolded here, with Uchida as the office lady main character, Ohashi as the god of death, Nanjo as an angel, and Tomita as a female fortune-teller working part-time at a pizza shop. Everyone got to enjoy some fun dialogue with ad lib mixed in. 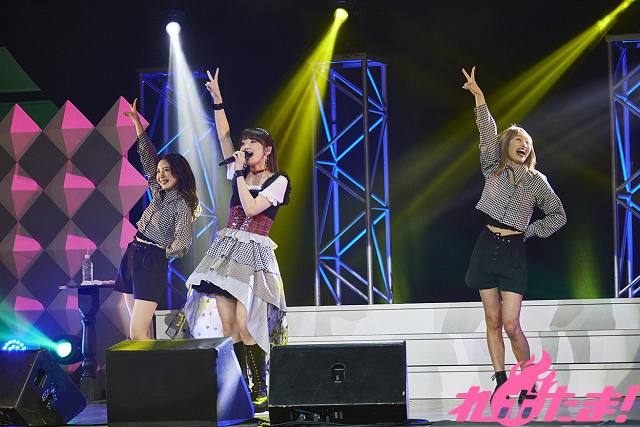 The second half of the event started off with Ohashi on the stage. Pointing forward, she sang the debut single “YES!!” and “Daisuki.” On this day, she sang “HOWL” with a powerful singing voice while wearing a costume with a “fighting maid” look, and finally sang “START DASH” in a more relaxed manner.
In the “Talk Corner”, she introduced her routine. Recently she’s been really into making à‐la‐carte dishes, while also showing enthusiasm toward learning about snacks to have with “evening drinks”. 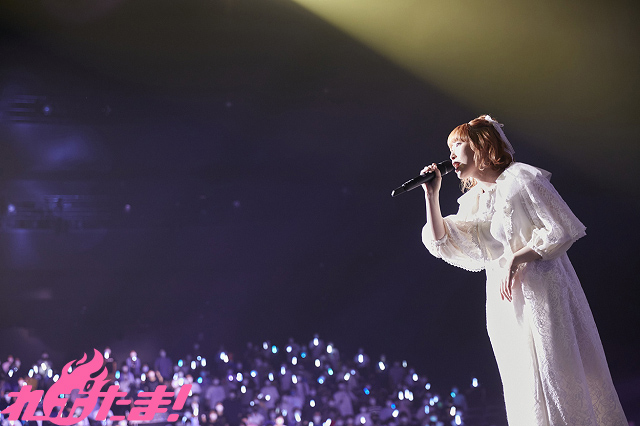 It was Nanjo who started off the second day. Appearing in a pure white angel-like costume reminiscent of the previous read-aloud drama, she performed “Namida Nagaruru Mama”.
“Today I brought songs with the theme of ‘light’,” Nanjo said, and then sang “Shinsekai,” followed by a performance of “simple feelings” and “Hikari no Hajimari”.
Back at the “Talk Corner”, Nanjo, who says she “does nothing” on days off, is the opposite of Uchida, and then explained how she spends a typical day off. “I don’t think there are many people who can actually ‘do nothing’,” she said.

Finally, the four performers sing a cover for a song of their choice, one after another.

Tomita performed a cover of “Departures – Anata ni Okuru Ai no Uta -” by EGOIST, the ending theme for the anime “Guilty Crown”, which she was in love with in elementary school. Ohashi performed next, singing “Little Braver”, a song from “Angel Beats!”, an anime which served as a catalyst for her wanting to become a voice actress. Next, Uchida sings the theme song “real Emotion” from the game “FINAL FANTASY X-2” which appeared at an important turning point in her life. Finally Nanjo sings the opening song “Over Soul” by Megumi Hayashibara, from the anime “Shaman King” (2001).
At the end of the day, with the wish of “meeting everyone again”, the four performed the ending theme “Okaeri” of the anime “Non Non Biyori Repeat”, and the event drew to a close.

After the performance, “EJ MyGirl Festival 2022” was announced. The next 2DAYS event will be held at Maihama Amphitheater on March 5th (Sat) and 6th (Sun), 2022, and is a must-see event.