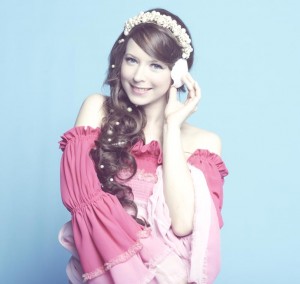 Anime singer HIMEKA`s first single “Where I belong” gonna release from October 24th (Wed). This is her first single that after she transferred.

The ending song of “Audrey no Kami Apuri@Shinseiki-UP DATE” which is on aired by TV Tokyo from July.

She won the “ 2nd Animax all Japan Anime song granprix”. After the grand prix, she song the TV animation “Senjyou no Valkyria”`s opening song “Asu e no Kizuna” and that was her debut at Japan.  Now she`s making a new action!

Himeka came from Quebec, Canada and her first language is French.

She learned variety of art and music from childhood and learned English. In her youth age, she was charmed in Japanese Animation. She watches and listens to many kind of Japanese animation and after all she became native level of Japanese speaker. Also, her interest leads her to visit animation expo in U.S.

In March 2008, Himeka get working holyday visa and she move to Japan. Then she entered to the “second annually Animax all Japan Animation Grand Prix” and became winner of this competition. Especially, at the final, her performance left huge impact to the judges.

Her debut song was “Asu e no Kizuna” which was used in TV anime “Senjyou no Valkyria”`s opening at May 2009. At this time she belonged to the Sony Music Japan International and she also released 3 more single and 2 albums.

2012 april, Himeka transferred to amluleto/5pb. She is well skilled singer who has powerful and beautiful voice.