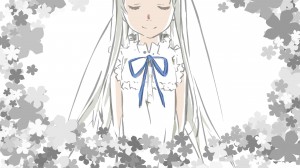 Anohana: The Flower We Saw That Day is coming to screen on 2013 summer!!

On 2011 April, Anohana: The Flower We Saw That Day known as “Anohana” was broad casted by Fuji TV.

It marked 5.5% of viewership and Blue-Ray and DVD sale over 270,000. The ending song which cover the ZONE`s “secret base Kimigakureta Mono” ranked in to 10th at Japanese hit charts. Also, scripter Mari Okada wrote the novel version of “Anohana vol 1” and published over 100,000 of books.

The event “Anohana Fes” which was held in story`s basic back ground Chichibu, Saitama marked over 5000 of people. Director Tatuyuki Nagai received the 56th media art prize from Agency for Clutural Affairs.

From 2012 April, comic version of “Anohana” got serialized in Jump Square, Shueisha. On August 10th, “Anohana vol 2” is going to publish too.

August 5th (Sun), “Anohana Natumaturi～Chou Heiwa Busters no Otanoshimikai” was held and had surprising announcement. The movie “Anohana” is coming up on next summer. (2013)