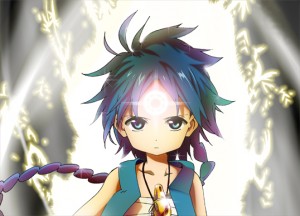 The second and third key visuals would be show up on July 4th and 11th.

New TV animation program “Magi” is scheduled at every Sunday noon from october 2012 by MES and TBS.

The boy “Aladdin” is trekking a continent to find secret treasure which is hide in mysterious labyrinth called “dungeon to rubi”
One day, he met Ali Baba and he decided to go together to complete the dungeon. During the journey, he slightly realized his destiny by having a lot of meeting and parting.