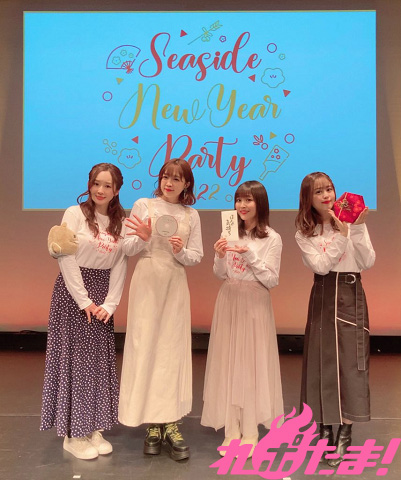 Seaside Communications (hereafter referred to as Seaside) is a production company that makes content with voice talents. An event featuring many personalities from programs produced by Seaside was held on January 15, 2022 (Sat) in the Science Hall at the Science Museum in Tokyo.
This time, we’ll be covering the events of the “Daytime Part”.

In the “Daytime Part” Haruka Terui and Ayaka Suwa from “Haruka / Ayaka no SS Channel”, Yuuki Kuwahara from “Kuwahara Yuuka to Hondo Kaede no Pari Pari Parry ☆” and Natsumi Hioka from “Hioka Natsumi no ‘Maru-C Nacchan’” all appeared on stage.
While everyone was caught up in the event that had “be filled with laughter and moe” written into the script (lol) the event began with a fashion check. Suwa was wearing one of the long T-shirts that was being sold as one of the event goods, and she seemed enthusiastic about her earrings and sneakers that had a tiger design.

First off was the “2022 Happy New Year Talk” segment. Here everybody talked about their New Year holidays and about 2022 based on various themes.
With the theme of “What I want to do on my own this year,” Suwa answered with “mountain climbing” and Hioka said “camping.” Then, Kuwahara said “It might be tough to do this year, but I’d like to get a driver’s license and go somewhere fun!” Terui replied with “I want the three of us to go to that “Land Where Dreams Come True” with somebody taking the wheel!” as one of her current goals.

Next, they were asked “How did you spend your year-end and New Year holidays?” Suwa spoke up first, saying “I was taking part in Seaside’s year-end countdown event (stream).” There were lots of fans who were there watching it, and she thanked them all and said “Thank you for spending the year together with us!” The talk was also a lot of fun, and the four members happily said together “We want to hold a countdown event together again at the end of 2022!” They finally said “All you wonderful higher-ups, please hear us out!” to the Seaside staff right there on the spot. (lol)

Next, the theme of “Introducing my program” was brought up. Terui said “Initially, I only talk about the opening and ending, and then I talk about the rest of the events in the story from the perspective of the various characters according to the theme for that time. It started out as a ‘Situation Radio Program’. But…” she paused for a moment, before continuing with a bitter smile “There really isn’t such a setting anymore, because at some point it primarily became a free talk session.”
Kuwahara said “There’s a section called ‘Let’s make Kuwa-chan laugh” and Ede-chan (Kaede Hondo) comes around to make me laugh by telling me one of the listeners’ stories. But more than the stories, it’s her seriousness in trying to make me laugh that makes me lose it every single time,” she said with a laugh.
Then, Hioka began to explain her program “On mine, the concept is that I become a teacher and create various things,” before the three others joined in and said “(all 3 programs) are recorded in the same studio, and every time we go there we notice that the number of odd-looking dolls is increasing. But then we were shocked once we realized that maybe Nacchan (Hioka) was making all of them!”
Next, Suwa said “Nacchan typically plays cute idol characters, so I’d like to see her do a cute pose.” Hioka then gave a wink and blew a kiss at the audience, gaining an instant roar of applause from the hall.

The “New Year! 2-Choice Chat” segment then began, where they had to answer various themes like “If you get a choose a special day to spend with your lover or husband, would you A: Make a grand surprise, or B: Take it easy and spend time together in a calm way,” and they would need to answer with one of the two choices.

“If you move for a month, would you rather A: Live on an uninhabited island with tons of natural foods available, or B: Live in a foreign country where you can’t understand the language anywhere at all?” Everyone responded with “B” to this question, but Terui said “I don’t like either of these options!” (lol)

Next was the SEASIDE NEW YEAR PARTY 2022 segment. A gachinko match segment where the four members took on various challenges and received gifts according to the rankings they received from the Seaside staff.

First, the “Kendama Challenge” began. The points would vary based on how difficult it was to get the ball into place, getting more points for landing it on the tip of the toy and less for getting it on the flatter sides. Hioka succeeded in getting it onto the tip and won a lot of points, winning first place in this event.

In the “Ring Throw Challenge” they would receive points for every ring they got to stick. Keeping her momentum from the kendama segment, she leaned forward and found a “winning method” (?) throwing with both hands and winning yet again.

In the “Otoshidama Present-Giving Challenge”. They were prompted to come up with a gift idea for a 7-year-old boy other than money, and the person to get the most applause for their idea would be the winner. Terui simply said “Nintendo Switch” and took first place with her idea.

After the challenges were over, Terui and Hioka ended up with a tie, but Terui won after a quick round of rock-paper-scissors! She got an “arm pillow that also can be used as a massage device”. Next, Hioka received luxury confectionery, Suwa got a DVD from Hioka’s “Business Azato” program, and Kuwahara won a participation award of a 5-yen coin.

In the New Year Questionnaire, a talk was given based on the answers given from fans in a questionnaire taken in advance.
With the theme of “impressive New Year’s holiday memories,” the four people responded with “That must have been delicious!” to a fan saying “I ate Kuri-kinton on butter toast.”
Also, another answer given was “I had to work on New Year’s Eve to deal with the so-called Y2K problem reported all over the place, saying that systems were going to mess up everywhere after December 31, 1999.” Other answers such as “I spent one New Year’s in cosplay” were also given.

Finally, they each gave comments as the Daytime Part of the event came to an end. Hioka said “I didn’t have many opportunities to talk to Terui-san and Suwa-san up to this point, but it was such a good time talking together today!”
Kuwahara said “It was so great getting to spend time with all of these lovely performers. I’m looking forward to going to that “Dream Land” together (laughs)”.
Suwa said “Everything we did here today was so much fun! I received a lovely gift early in the new year (laughs). There seems to be a lot of exciting things coming up soon as well. I hope everyone will have a great time this year!”
Terui said “I’m glad we were able to have such a great event today! After this, I’m going to immediately make a group on LINE so we can start heading for “Dream Land”. I’ll be getting ready for that (laughs)”.
And with that, the event came to a close.