☆There is also a dream session project with the fans that will also be held, called “Kanadeyou GIG! with! you! ~Issho ni Bando Shiihen?~”

One of her dreams since her debut, holding an event in her hometown of Gifu has long been on her mind. Gifu was selected as the “number one place that fans want to go” at the events held up to this point. And, finally, a plan for the event has been realized! The Gifu Grand Hotel has been loved by locals for the 50+ years it has been in operation.

The performance will be held in two parts, adn the main content of the event was decided with the fans during the online event held locally in Gifu on November 21, 2021. The first part will feature various first-time challenges, such as “What’s in the box?” and “Praise for Riko Kohara” which was decided by a majority vote from the fans.
In the second part, “Kanadeyou GIG! with! you!” will be held as a special event. For the first time, a session event with the fans taking part on-stage will be held.

In commemoration of the event, there will also be a “Gifu Grand Hotel Special Accommodations Plan” offering special benefits such as a “Voice Keychain” with recordings of Riko Kohara speaking in the Gifu dialect. Also, visitor goods will be handed over directly by Riko Kohara herself with gratitude to each person.
Many other “First-time challenge” projects are planned for the event, and it’s certain to be a birthday event that will bring a lot of joy to fans of Riko Kohara.

【Special Plan for Local Birthday Event】
“Kanadeyou GIG! with! you! ~Issho ni Bando Shiihen?~”
Currently looking for members who want to join the session in “Part 2”. (※If there are a large number of applicants participants will be chosen at random).
The session application URL will be included in the email sent to winning applicants of “Part 2”. 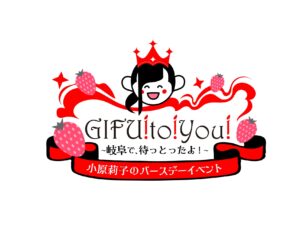 ※Tickets sold on a first-come, first-served basis before being sold out