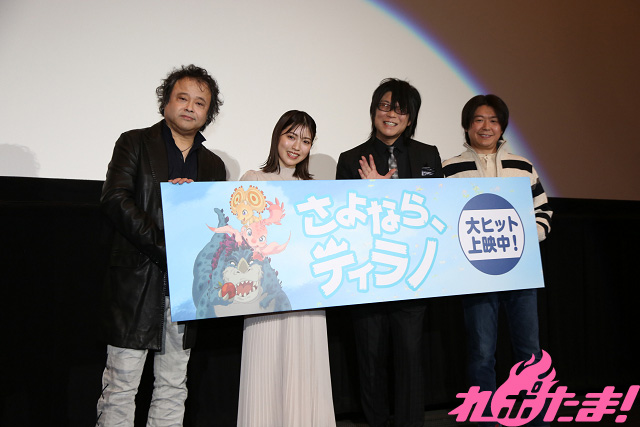 “Tyrano” the Tyrannosaurus who dislikes the dark, meets “Punon” the flightless Pteranodon, and they travel together in search of “heaven”.
The first day stage greetings of the 2021 animated movie “Goodbye, Tyrano” based on the three hugely popular picture books “I’m Always With You”, “I Love You”, and “Do You Believe Me” by Tatsuya Miyanishi. The opening greetings were held on December 10th (Fri) at Shinjuku Wald 9 in Tokyo.
On the day of the event, Kaori Ishihara (voice of Punon), Toshiyuki Morikawa (voice of “Golgo” the boss dinosaur’s minions “Rucchi”), Nobuyuki Hiyama (voice of the minion “Gocchi”) and Director Kobun Shizuno all took the stage.

“Once I saw the names of all the cast members, I got really nervous because everybody was an industry veteran,” said Ishihara. It wasn’t possible to get in touch with him, but he had the opportunity to preview the dubbing of Morikawa and Hiyama and he commented “There was a lot of ad-libbing and it made me laugh a lot.”

Also, one of the reasons why Morikawa and Hiyama ended up in the film is because Haru Yamada, the sound director, is acquainted with them.
The two were present at their long-lived event “Toshiyuki Morikawa and Nobuki Hiyama Are Here For You!” and Yamada came to see it, and while he was there he reportedly thought they would make a great fit for Rucchi and Gocchi with the kind of atmosphere they were putting on, and gave them the offer then and there. Morikawa said with a smile “I’m glad I’ve been doing this for 26 years now!”

Director Shizuno also told a story about when this offer was made. “I’m a big fan of Miyanishi-sensei, and when the work “Omae Umasoudana” was made into a movie, I thought “If I was able to be the director…” so I sent out two replies.”

Also, a story about dubbing with Unsho Ishizuka (voice of Grandpa Kera) was also shared. Unsho Ishizuka-san passed away in 2018 before the release of this movie.
Ishihara said “I was able to see Ishizuka-san performing up close. His voice was a voice I’ve heard since I was a child, and his performance was filled with a kindness that wrapped around me and filled me with a warm nostalgia. It’s a memory I’ll remember as long as I live.”

When asked about the character he wanted to play, Hiyama said “I’m something of a villain myself, so I wanted to take on the role of Golgo. It wasn’t reasonable for me to be afraid of my kouhai Katsuyki Konishi (who got the role for Golgo), but since he got the role he’s the senpai this time. I wanted to be the big cheese, though… (laughs)” Hiyama jokingly answered.

At the end, a video message from Shinichiro Miki (voice of Tyrano), who unfortunately wasn’t able to attend the event, was played.
“I was overwhelmed by Ishihara’s performance as Punon, and I learned a lot just by observing her,” he said. “From young talents to industry veterans, everybody has put in such a sincere performance in their respective roles. I’m honored to have had the opportunity to be involved in such a wonderful work.”

【Synopsis】
Once upon a time, there was a story that happened long before humans came to be…

At that time, there were creatures called dinosaurs that roamed the Earth, but the ice age was fast approaching and the world soon to be devastated.
A girl Pteranodon named Punon (voiced by Kaori Ishihara) who travels on her own was attacked by the minions of Gorgosaurus named Lucchi (voiced by Toshiyuki Morikawa) and Gocchi (voiced by Nobuyuki Hiyama) and is mere moments from being eaten alive.

Just then, the Tyrannosaurus named Tyrano (voiced by Shinichiro Miki) appeared.
Taken aback by the sudden appearance of the strongest dinosaur around, Rucchi and Gocchi escape as soon as they can. However, Tyrano did not bother Punon and instead began munching on the mysterious red fruit on the tree nearby.

Punon takes a liking to Tyrano, who doesn’t eat meat and is afraid of the darkness, and she tells him that she is searching for a paradise on earth called “heaven”, a place filled with red fruits and she invites him to come with her. Tyrano decides to travel with her even after initially refusing, because he began to worry about the Punon who is following a mysterious butterfly that apparently will lead her to this paradise.
At the same time, Gorgo (voiced by Katsuyuki Konishi), the “white devil” Gorgosaurus hears from his minions that this “heaven” is full of herbivorous dinosaurs (prey) live, and he orders that they find this place immediately.

Eventually in their journey, Punon and Tyrano help the young Triceratops named Tops (voiced by Aoi Yuki), who is hungry after being separated from his mother but also claims to be from “heaven”. Punon and Tyrano finally arrive at the entrance of “heaven” thanks to Tops’ directions. However, what they found waiting for them was…