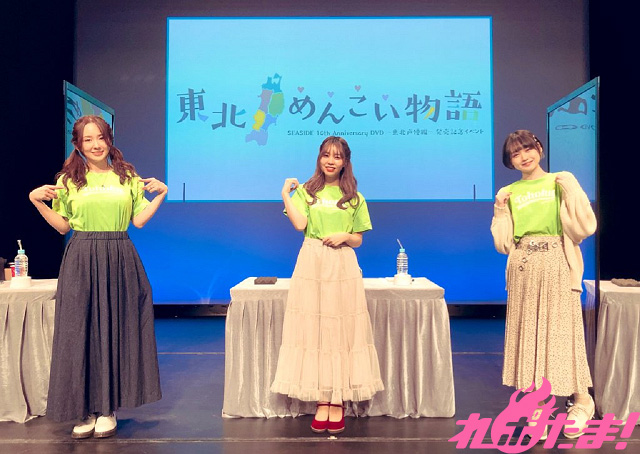 Seaside Communications 10th anniversary commemorative DVD 『SEASIDE 10th AnniversaryDVD-Tohoku Seiyu Edition-』is now on sale! An event commemorating its release was held on Saturday, November 13th at the Science Hall in the Science Museum in Tokyo. Haruka Terui and Kaya Okuno from Iwate Prefecture as well as Hina Tachibana from Miyagi Prefecture took the stage on that day, and the talk they gave about the Tohoku region was full of energy!

Also, the performers on the DVD are Terui-san and Okuno-san, as well as Himika Akaneya (Akita Prefecture) who unfortunately wasn’t able to come to the event on the day. Tachibana-san, who hasn’t made an appearance on one of the DVDs yet, was full of enthusiasm and said “I can’t wait to talk all about my home town for the first time!”

First off, they gave a retrospective talk about the DVD. From included segments such as “A one-day date plan in my hometown” and “Tohoku Souvenir Design Showdown”, the performers had a lot of fun looking back on the segments on the DVD about their hometowns. Also, in the “My Tohoku Profile” segment which was also featured on another program, the three performers introduced themselves and talked about their personal memories.
Terui-san talked about the time she “Worked hard with my classmates to win the first place prize in chorus singing” and Okuno-san talked about when “I got to hang out with the son of the president of Sanriku’s famous “Kagome no Tamago”. Tachibana-san ate a lot of Japanese sweets when she was younger from a shop known as “Kikufuku” and really pushed this place to the front of her talk. The common dream between all of the performers is to appear in a local anime. They’re all looking forward to the day when they can all do this together.

Next, there was the “Introduce the attractions of Tohoku’s 6 prefectures” segment. In the afternoon part of the event, the charms of Aomoroi, Akita and Iwate prefectures were all talked about. Food ended up being the primary focus, with the delicious foods such as “senbei-jiru” (Aomori Prefecture), “kiritanpo” (Akita Prefecture) and “jajamen” (Iwate Prefecture) receiving a lot of praise.

In the “Our Tohoku” segment, various events common to the three performers when they lived in Tohoku were talked about, such as things that happened often at school or on holidays. When Tachibana-san said “In the frigid winter, I was fully-prepared with hand warmers and a mask” the other two strongly agreed with how important this was for them. Also, when Terui-san said there were too few channels on TV that aired anime, Okuno-san and Tachibana-san replied with a loud “Right?”

In the “Tohoku Charms Contest~Tohoku Menkoi Battle~”, the three performers competed to recall as many local specialties as possible. The main rule in the first part was that the person to come up with the most “things I love about the Tohoku region” wins. It ended up being a close battle, but Okuno-san took the win with such responses as “clean air, gentle folk, and healthy skin”! She was awarded a dish of Hinai chicken stewed in tomato.
In the second part of the competition, a quiz showdown took place. “What’s the name of the museum that only exists in Miyagi prefecture?” and “What kind of pumpkin is Aomori’s famous “Ikkyuu Nyuukon Pumpkin”? are just some of the questions that were asked. The rule was supposed to be that the person who answers with the most responses is the winner, but Terui-san declared to “cooperate with each other to all get some of the prize” and the other two agreed. They got some help from the audience, and in the end all of the questions were answered correctly! They ended up being awarded a “Shine Mascot Sweet Bean Cake” but because they cheated the system they all had to read out “Embarrassing lines in the Tohoku dialect” as punishment. (lol)
The guests also really enjoyed this part.

The final segment was the “Your Episodes from Tohoku” where the fans gave personal stories about things that happened to them in the Tohoku region. One fan told a story about the time they were on their way toward the easternmost tip of Japan’s main island Honshu in Iwate Prefecture, and then had to start walking part-way during the journey and the road became really harsh. In response, Okuno-san said “Was that okay? Did you run into any bears……?” and was clearly worried about the situation. (lol)
After that, the performers talked about such topics as “It was tough to correct the intonation from my dialect when dubbing”, “It’s challenging explaining the details of my dialect to my acquaintances” and everyone had a good time going over old memories. 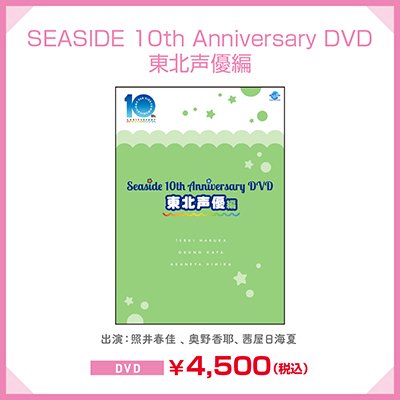 The second DVD commemorating the 10th anniversary of Seaside Communications is now on sale!
This time, Haruka Terui and Kaya Okuno from Iwate Prefecture, Himika Akaneya from Akita Prefecture as well as other voice actors from the Tohoku region come and talk about the charms and famous spots from their prefectures, and everyone helps show off the beauty of the Tohoku region.
Also, everyone took on all kinds of Tohoku gourmet challenges!
This is a special project only viewable here that clearly conveys the beauty of the Tohoku region. We hope you’ll watch it all the way to the end!