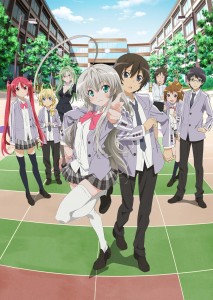 “Haiyore Nyaruko-san” appears on TV again!! This program was broadcasted 2012 april through June and accepted to create the second seasons.

This TV animation “Haiyore Nyaruko-san” basically came from light novel which wrote by Aisora Manta and illustrated by Koin. Novel was published by GA bunko (SoftBank Creative) and it marked sales for over million!! It was most famous Anime at this season in Japan. Moreover, “Haiyore Nyaruko-san” marked most review anime on the web.

The Blu-ray which starts selling before the final episode also marked higher rank in Oricon Blu-ray hit chart. On the other hand, the anime characters were also had collaboration with many companies such as Japanese fashion brand Beams. Like these example, Nyaruko-san affected to many business scene and social.

After first episode was over, Nyaruko`s official website (http://nyaruko.com/) displayed a mysterious count but it solved in November 28 that it was special announcement of second season. She gonna crawling up again!

Back to the 8.5 Haiyore Nyaruko-san: digest of “Jashin Seitan Sai” and “Kourin Sai”(30 mins)