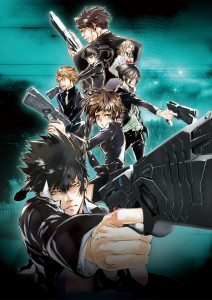 New animation “PSYCO-PASS” is schedule to start from October by Fuji TV`s Noitamina” and etc. Key visuals which were worked by popular comic artist Akira Amano and additional cast information are now announced!

Voice artists of five characters whom belong to public security department were announced.

First episode will aired on 2012 October 11th by Fuji TV`s Noitamina at 24:45.  Also, Kansai TV, Tokai TV and other TV stations are schedule to start the program at same date.

Hello, I`m Kenji Nojima that voice actor of Ginoza. I was expecting for “PSYCO-PASS” because I heard this story was about detective story of future. I didn`t have any chance to work on detective kind story, so I am glad to work on this animation. It`s a man’s romance. We are recording really friendly and I can`t wait for next recording. Thank you!

Hello, I`m Akira Ishida that voice actor of Shusei Kagari. Now we start the recording of “PSYCO-PASS”. I roll as department of public safety`s officer who clamp down on criminals. The first episode gave me a perfect answer that I couldn`t understand. The word was “That system is dominating the justice”.  I really confuse that “what is system which dominate the justice??? By the way, does justice gonna dominate? I don`t hav like that feelings”. Everyone please enjoy!

It has unique view of world and makes us fun to work. Please watch out to main characters that how they live in such unusual environment.

I would like everyone to watch out the girl name “Yayoi” that how she gonna survive in this world.

She appears from ep2・・・・by the way, her position was more important than I expected.

I am having fun to act Shion because it is interesting to know how she relates to the story.

The story`s back ground is in future that completely control by the computer such as massive drone police, and computer which analyze human to control.

Honestly, I don`t want to experience such world. But I have interest in people whom live such word. Does the humanness still exist in that world? Watch carefully. 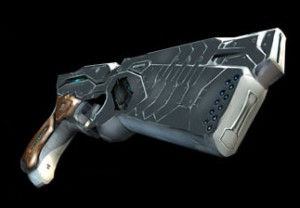 Only the officers are allow to hold this gun. It calculate the person`s criminal potential.

Personality is Tomokazu Seki and Kenji Nojima. Kana Hanasawa has her own segment at this program too.

“The muzzle dominate the justice”