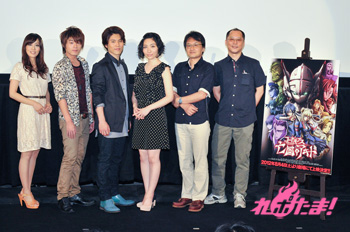 Watch the battle front in Europe at this summer!! We report the reception of “Code Geass Boukoku no Akito” the first chapter “Yokuryu ha Maiorita”!! Miyu Irino, Maaya Sakamoto, Yoshitugu Matuoka and Yoko Higasa had speech about their feelings.

I though it has different worldview than past one (TV version). I`m really appreciate that I worked in this project. In this first season, we packed a lot of enjoyable things. I would like people to watch it again and again. Actually, I didn`t watch it yet so some day I would like to sit here and watch.

When I think about Layla`s personalities, I would say she is cool. That is her strong point but also her loneliness. I image and act her as different as common girl. This time I song the theme music “More than words” as well. What made me surprise was people whom work with this song. Youko Kanno (music composer) and Yuho Iwasato (lyrics) were the people whom made my debut song. Moreover, debut song was used at “Tenku no Esukafrone” which directed by Mr. Sekine. I glad to work with these three persons again.

I used to watch “Code Geass” on TV and that time I was in school. I did not expect that I related with this story. Especially, I liked battle scene at this story. All of robots are 3DCG and moves really fast!! I felt improvement of technology. The story moves towared 2nd and 3rd seasons. At the recording studio, I talked with Higasa and Hino that “Hopefully, our character alive during the story” but we`re not sure about that yet. I would do my best during my character alive.

I watched this “Code Geass” on TV as well but now I am working at this story. I still cannot believe it. In addition, 1 or 2 years ago, I saw the dream like I roll in this story and failed some mission. At this time I didn`t have any offer from this project. I feel wonder that I`m having speech here.

Please watch out the Ayano that how she act and survive.

After TV animation “Code Geass” is finished, we talked about the next series. Then we settle the Mr.Sekine as director because next series, we wanted put more robot battle in the story. Mr. Sekine is specialized in such work. Then he work as we wished.

This story has many twist and turn and I`m not sure that character whom everyone here to play could alive. Hopefully, I would like to lead the story with happy ending. Moreover, I want everyone to say “Awesome”.

I have confidence about this story. I did my best.

I had concrete image of Akito and Layla, so I asked Maaya and Irino to play. I wasn`t wrong! They did great job. Then I also thanks to Higasa and Matuoka. These two persons put the amazing power to characters.

I will work hard to make this story fun with my staff. Please watch us!!

The movie is on screen at Shinjuku Wald9, Cinema Sunshine Ikebukuro and 30 theaters in Japan.

Special thanks of writter: Shigeru Morita

Limited version: (With CD and DVD which include the music video of “More Than Words”) $20( price will change at current currency rate)